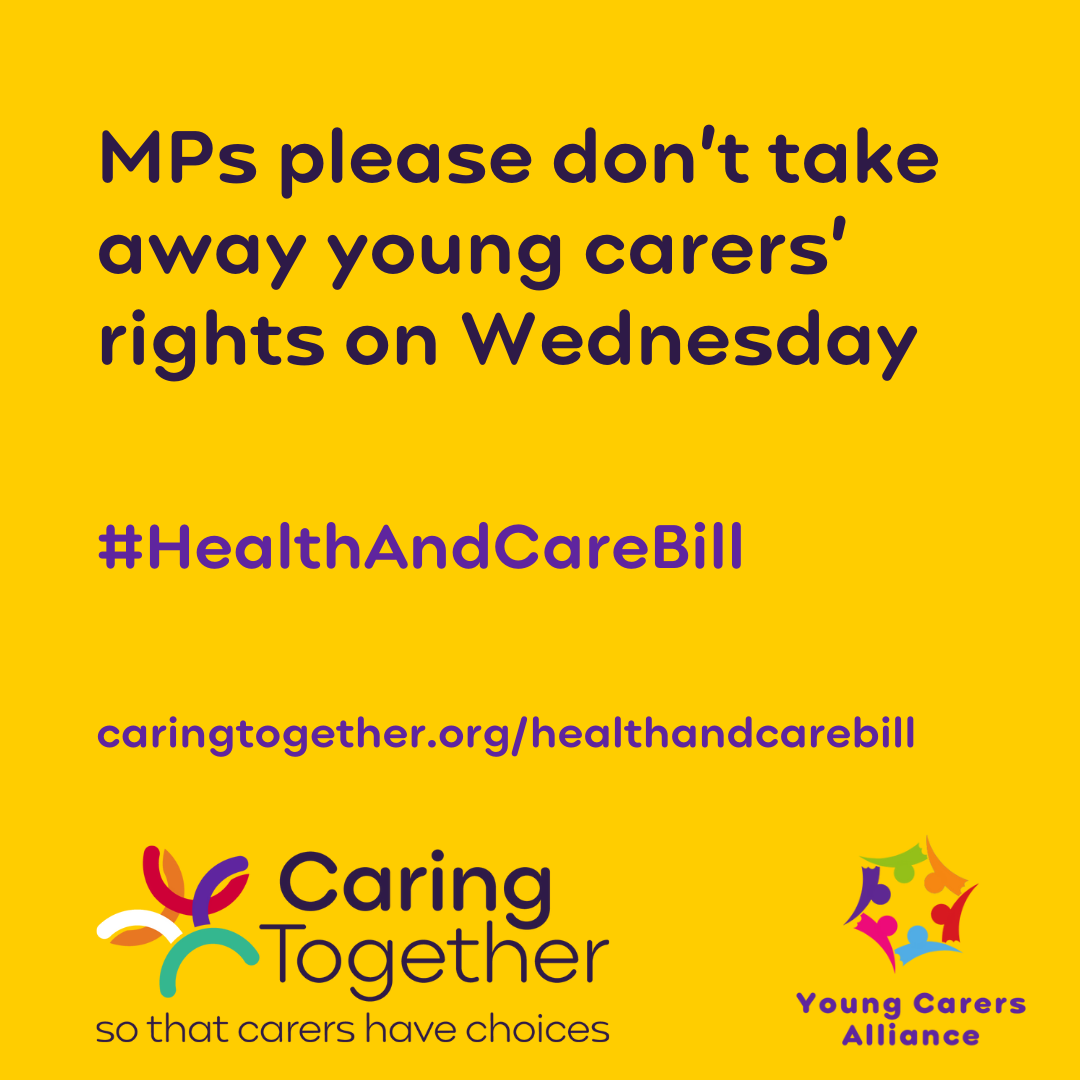 Wigan and Leigh Carers Centre, along with Caring Together, Barnardo’s, Carers UK and members of Young Carers National Voice have been working to try protect the legal rights of carers which are at risk of being removed through the Health and Care Bill 2014.

There is a key vote in the House of Commons on Wednesday 30 March.

Under s2 Community Care (Delayed Discharges etc.) Act 2003, carers have the right to be consulted where ‘it is unlikely to be safe to discharge the patient from hospital unless one or more community care services are made available’.

The Health and Care Bill removes carers’ rights at the point of hospital discharge, as it repeals the 2003 legislation. This means that the requirement for hospitals to consult unpaid carers prior to discharge will be lost.

Members of the House of Lords recently successfully passed an amendment which would retain these rights in the Bill. However, the Bill is set to now return to the Commons on Wednesday 30 March, where they will consider all of the successful Lords amendments. Importantly, they will remove any that they do not agree with.

This means that the carers amendment that was won recently in the Lords could be overturned in the Commons – this would again mean that carers and young carers will lose their right in primary legislation to be consulted by hospitals before discharge.

Evidence of why this matters

Wigan and Leigh Carers Centre, Caring Together, Barnardo’s and the Young Carers National Voice network, who are all members of the Young Carers Alliance, have heard from young carers across the country that they often don’t feel recognised or acknowledged by hospital staff and young carers are very rarely identified for support by health professionals. Young carers have not been included in conversations around hospital discharge, even when they are the primary or sole carer.

A recent snapshot survey by Caring Together showed that despite young carers having statutory rights, it is still taking on average 3 years for them to be identified as young carers, with some young carers caring for more than 10 years without any form of support.

The Government has promised statutory guidance as a way of resolving this issue, but guidance doesn’t have the same impact as rights in primary legislation and for carers organisations, it is not as easy to address and challenge poorer practice to ensure that these rights are upheld.

How you can help

There are a number of ways in which you can help before the vote on Wednesday 30 March:

I am writing as a constituent who wants to see young carers properly supported, to ask if you would write to both the Secretary of State for Health and Social Care and the Minister for Care and Mental Health, to ask for the carers amendment which was successfully passed in the House of Lords to be retained in the Health and Care Bill.

This amendment safeguards the statutory right for unpaid carers to be consulted prior to the person they care for being discharged from hospital. If the Government doesn’t retain the amendment, it would be the first time that unpaid carers’ rights were being removed in health and care legislation.

There are as many as 800,000 young carers in the UK providing vital support to parents, siblings and other family members. But all too often they do so without the support they need and deserve; and, at great cost to their own health, education and wellbeing. The COVID-19 pandemic continues to impact on their lives, with a Carers Trust survey published just this month highlighting that 44% of young/young adult carers reported that their mental health is worse. Over half of the children and young people said the amount of caring had increased in the past year and 1 in 7 were caring for more than 50 hours a week.

The carers’ amendment that was passed in the Lords would retain carers’ rights to be consulted before a patient is being discharged from hospital.

Keeping this amendment would mean a great deal for those young carers experiencing the hospital discharge process. It will also facilitate the early identification of young carers, thereby preventing the harmful impacts of caring by connecting them with the much-needed support from their local young carers’ organisation, rather than making it even more difficult for them to be identified. A recent survey by Caring Together found that young carers were caring on average for 3 years before they were identified, and I have heard of young carers caring for more than 10 years without any form of support. If the Government were to retain the amendment, it would send a strong signal to young carers that they mattered; a message which I am sure you would be keen to support just weeks on from Young Carers Action Day.

Through the work of the Young Carers Alliance, I am aware of young carers who have not been involved, supported or even acknowledged when the person they care for is being discharged from hospital, even when that young person is the primary carer. This leads to confusion, stress, and reduces the prospect of a successful discharge. Hospital discharge is a “make or break” time for everyone, adults and children alike, and it’s essential that we empower, protect and support young carers – keeping the rights that they are at great risk of losing.  Keeping the amendment would support the efforts to prevent children and young people taking on inappropriate and excessive caring responsibilities.

Government has promised statutory guidance as a way of resolving this issue, but guidance doesn’t have the same impact as rights in primary legislation and, local organisations will not find it as easy to address and challenge poorer practice to ensure that these children, young people and their families are supported. They work in partnership with local hospitals and have found primary legislation to be so helpful in this regard. Guidance does not and would not have the same effect. Keeping the amendment in the Bill would support improved identification of young carers, reducing the impact on their own health and wellbeing, help with integration of health and social care services, and most importantly, put families and children at the heart of high-quality care.

I hope that you will consider supporting the thousands of young carers locally to keep the rights they are about to lose by raising this with the Secretary of State for Health and Social Care, Sajid Javid, and the Minister for Care and Mental Health, Gillian Keegan, as a matter of urgency.

I look forward to your response.

Template tweet
@ (insert your MPs twitter handle) please show your support for #youngcarers on Wednesday by voting to accept the amendment to the #HealthAndCareBill to retain carers’ existing legal rights around hospital discharge – www.caringtogether.org/healthandcarebill @YCAlliance