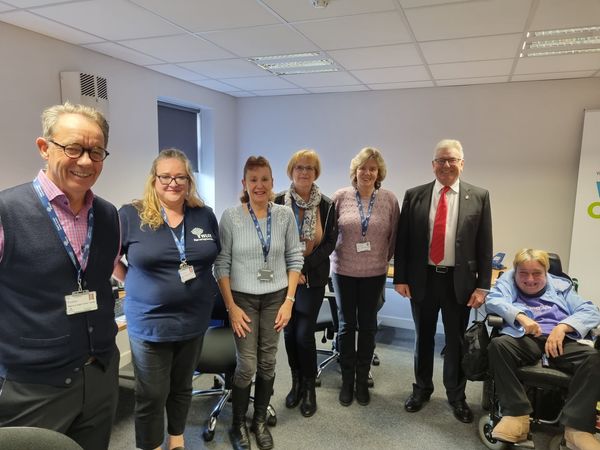 We are thrilled to announce that Wigan and Leigh Carers Centre has been nominated for a prestigious volunteering award, The Queen’s Award for Voluntary Service, in recognition of our efforts and connection with the community.

On Friday 19th November 2021, Wigan and Leigh Carers Centre had the honour and pleasure of welcoming Deputy Lieutenant of Greater Manchester, Martin Ainscough CBE for a guided tour and an opportunity to meet volunteers, carers, staff and trustees.

The Queen’s Award for Voluntary Service is the highest award given to local volunteer groups across the UK to recognise their outstanding work and contribution to their local community. The award was originally created over a decade ago for Her Majesty to mark the Golden Jubilee in 2002 and to recognise the outstanding contributions made to local communities by groups of volunteers. The Queen’s Award for Voluntary Service is equivalent to an MBE for volunteer groups.

Any volunteer-led group comprising two or more people having a positive impact on the lives of others in an exceptional way can be nominated for an award. A group must satisfy the eligibility requirements before the nomination can be processed through to the assessment stages of the award.

Phil Humphries, Chair of Trustees said, “The Queen’s Award for Voluntary Service celebrates the work of a fantastic, diverse range of volunteer groups whose work has enhanced and supported local communities over a number of years. It is also a chance to highlight our volunteers outstanding contribution to society and to recognise the crucial role they have played to support vulnerable people during the coronavirus pandemic.

Volunteers are the glue that holds our communities together. In these challenging times, they have stepped up their response and been vital to the national effort, for which we are all grateful. They are selfless, committed and compassionate, and work tirelessly, along with our core team whether at the forefront or behind the scenes, to support unpaid carers.”

We are very proud and humbled to be nominated for this award. Please wish us luck!